Going to be honest here, graphing this stuff in a way that makes sense and is useful is tricky and time consuming. I really like the way Rad does it with their lossless data compression library, Oodle. I'm going to try making graphs like theirs.

The bundles are on the X axis (sorted by decompression speedup, from slowest to fastest), and the actual relative speedup is Y (higher is better for LZHAM). The blue line is the relative speedup (or slowdown on the first 5 files, each between 54-16612 bytes - these files are either very small or with pretty high ratios). Blue line at 1.0=same decompression rate as LZMA.

The red line represents each bundle's compression ratio relative to LZMA's. Above 1.0 means LZMA was better (smaller compressed file), and below 1.0 means LZHAM was better. LZHAM tracks LZMA's ratio pretty well, and equals or beats it in many cases. (I did put LZHAM's compressor into its slowest/best parsing mode to generate this data.)

I make no claims this is the best way to visualize a codec's perf relative to another, I'm just experimenting and trying to gain insight into LZHAM's actual performance relative to LZMA.

This was on a Core i7, x86 build, LZHAM options: -h12 -x (fastest/least frequent Hufftable updating, up to 4 solutions per node parsing). 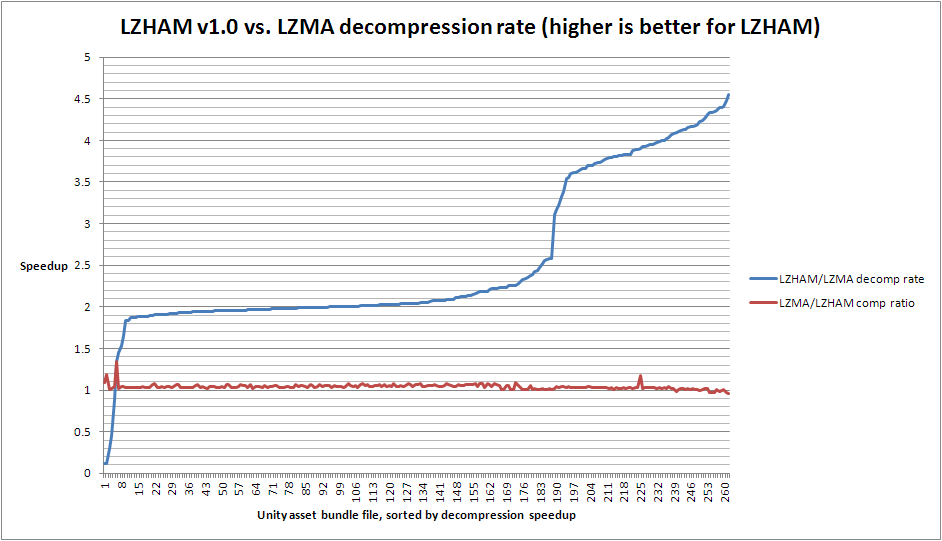 Posted by Rich Geldreich at 2:59 PM