LZHAM v1.0 vs. LZMA decomp. perf on a large corpus of files

LZHAM isn't always faster than LZMA. LZHAM has a more expensive startup cost (which I've reduced a bunch since the alpha but it's still there), and it must update several large Huffman tables at periodic intervals. The previous alpha versions had way too many Huff tables, which really dragged the codec down on some files. The new version now only has a handful of tables, I've reduced the default table update interval, and you can now fine tune the update interval. This graph was generated at update speed 20 (least # of updates/fastest).

To visualize where LZHAM is faster or slower, I ran a test app on a corpus of 21,702 files, all >= 1024 bytes (to reduce the sheer number of them) and timed how long LZHAM vs. LZMA took to decompress each file. This is a mix of game assets from various titles, the usual standard corpus files (calgary etc.), XML/JSON/binary JSON/source files, random WAV/BMP/TGA/JPG/MP3's, executables+DLL's from popular installs, etc. Just random stuff.

I tossed any results where LZMA expanded the data because in these cases LZMA is up to ~60x slower than LZHAM. LZHAM has special handling for uncompressed data, and LZMA does not, so it just bogs down really badly in these cases. There are still many cases in this graph where LZMA just bogs down terribly on nearly uncompressible files, LZHAM can win massively in this case because it chooses which 512k blocks to store uncompressed. 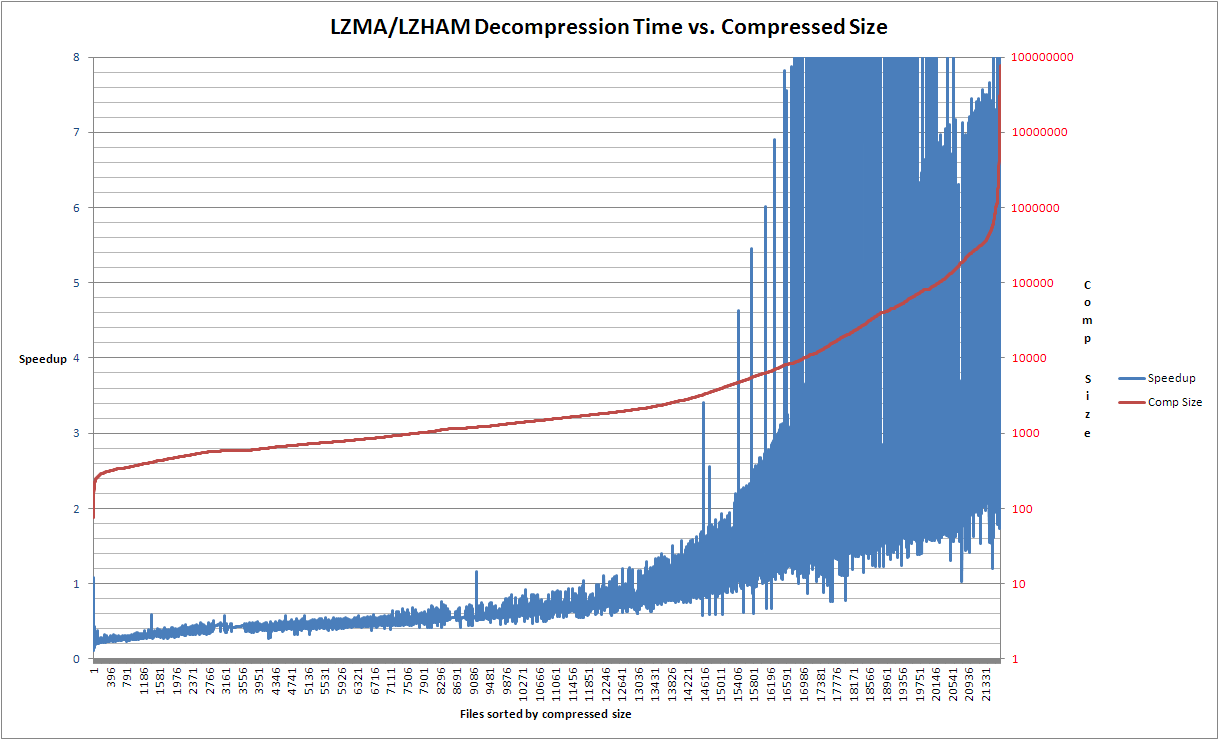 Here's the resulting graph showing LZMA's vs. LZHAM's decompression time on a 3.3 GHz Core i7, sorted by the LZMA's compressed file size. The blue line is the speedup, where less than 1.0 means LZMA was faster, and greater than 1.0 means LZHAM was faster.

The red line is the compressed file size on a log scale. This corpus has a ton of small (<4kb) files.

This graph shows than LZHAM v1.0 is pretty much always slower than LZMA if the compressed file size is <= ~2400 bytes. LZHAM can be only ~20% as fast in these cases. At around ~13k LZHAM is usually faster, and the greater the amount of compressed data the higher the likelihood that LZHAM is faster. You can estimate the threshold amount of original/source data if you know your data's average compression ratio.

Basically, LZHAM sucks on small blocks. I can make this somewhat better by reducing the startup cost, and optionally allowing the user to disable the huff table updating (or just slow it down even more). Another alternative is to have the compressor intelligently break up the input stream into a handful (or just 2) carefully chosen LZHAM blocks and issue a "update all huff tables now" command to the decompressor in between the block boundaries.

Note all of my timings include the time LZHAM takes to allocate its work memory and initialize its internal data structures. The dictionary size for LZHAM was always 64MB in this test, while the dict. size for LZMA was tuned to be the first pow2 >= the source file size, so it's possible LZHAM is at a bit of a disadvantage here due to extra memory allocation costs relative to LZMA. I'm running another test (in LZHAM's unbuffered mode) to find out if this makes any difference.

(Thanks to John Brooks for giving me some feedback on this graph.)

Update: Here's a new, less noisy graph with the following differences:
- Filtered out all files with a LZMA comp ratio less than 2% (because we know LZMA totally sucks at these low ratios)
- Switched LZHAM into unbuffered mode, for a minor decompression speed boost.

Posted by Rich Geldreich at 5:16 PM