I'm by no means an expert on anything San Diego, having been there only around 1.5 months since leaving Seattle. I did spend 8 years in Seattle though, and here's what I think:

- Seattle is just way too dark of a city for me to live there year round. Here's Seattle vs. San Diego's sunshine (according to city-data.com). 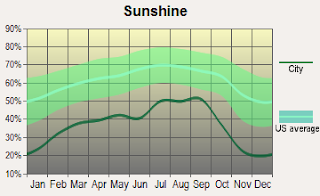 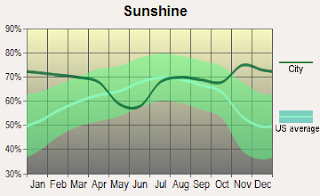 The winter rain didn't bother me much at all. It was the lack of sun. (Hint to Seattle-area corporate recruiters: Fly in candidates from sunnier climates like Dallas to interview during July-August.)

- There's a constant background noise and auditory clutter to Seattle and the surrounding areas that's just getting louder and louder as buildings pop up and people (and their cars) move in.

Eventually this background noise got really annoying. Even downtown San Diego is surprisingly peaceful and quiet by comparison.

- Seattle's density is both a blessing and a curse. It's a very walkable city, so going without a car is possible if you live and work in the right places.

The eastside and westside buses can be incredibly, ridiculously over packed. Seattle needs to seriously get its public transportation act together.

- As a pedestrian, I've found Seattle's drivers to be so much nicer and peaceful on the road vs. San Diego's. CA drivers seem a lot more aggressive.

- San Diego is loaded with amazing beaches. Seattle - not so much.

A few misc. thoughts on Seattle and the eastside tech workers I encountered:

I lived and worked on the eastside (near downtown Bellevue) and westside (U District) for enough time to compare and contrast the two areas. The people in Seattle itself are generally quite friendly and easy going. Things seem to change quickly once you get to the eastside, which feels almost like a different state entirely.

I found eastside people to be much less friendly and living in their own little worlds. I wish I had spent more of my time living in Seattle itself instead of Bellevue. Culturally Bellevue feels cold and very corporate.

The wealthier areas on the eastside seemed the worse. Wealth and rudeness seem highly correlated. So far, I've yet to meet a Bellevue/Redmond tech 10-100 millionaire (or billionaire) that I found to be truly pleasant to be around or work with. I also learned over and over that there is only a weak correlation between someone's wealth and their ability to actually code. In many cases someone's tech wealth seemed to be related to luck of the draw, timing, personality, and even popularity. Some of the wealthiest programmers I met here were surprisingly weak software engineers.

I've seen this happen repeatedly over the years: Average software engineers get showered with mad cash and suddenly they turn inward, become raging narcissistic assholes, and firmly believe they and their code is godly. Money seems to bring out the worse personality traits in people.

Posted by Rich Geldreich at 2:48 PM No comments:

This is a work in progress, but here's the API to the new rate distortion optimizing DXTc codec I've been working on for Basis. There's only one function (excluding basis_get_version()): basis_rdo_dxt_encode(). You call it with some encoding parameters and an array of input images (or "slices"), and it gives you back a blob of DXTc blocks which you then feed to any LZ codec like zlib, zstd, LZHAM, Oodle, etc.

The output DXTc blocks are organized in simple raster order, with slice 0's blocks first, then slice 1's, etc. The slices could be mipmap levels, or cubemap faces, etc. For highest compression, it's very important to feed the output blocks to the LZ codec in the order that this function gives them back to you.

On my near-term TODO list is to allow the user to specify custom per-channel weightings, and to add more color distance functions. Right now it supports either uniform weights, or a custom model for sRGB colorspace photos/textures. Also, I may expose optional per-slice weightings (for mipmaps).

I'm shipping the first version (as a Windows DLL) tomorrow.

// The codec can accept rdo_dxt_params's from previous versions for backwards compatibility purposes. This is the oldest version it accepts.
const int BASIS_CODEC_MIN_COMPATIBLE_VERSION = 0x0106;

// Output block size to use in RDO optimization stage, note this does NOT impact the blocks written to pOutput_blocks by basis_rdo_dxt_encode()
basis_uint m_output_block_size;