The data points have been sorted by zlib's compression ratio, which is why the green line is so nice and smooth. These are the same data points as yesterday's scatter graphs. 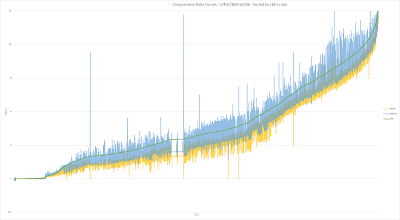 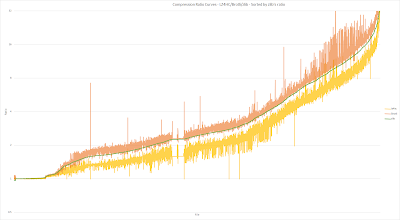 Brotli vs. BitKnit vs. zlib: 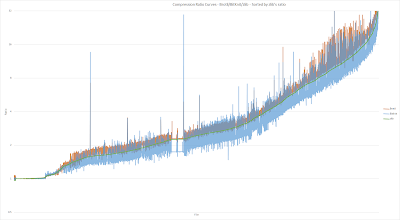 Here are a couple bonus plots, this time for LZHAM vs. LZ4HC or Brotli: 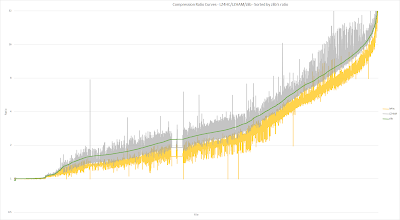 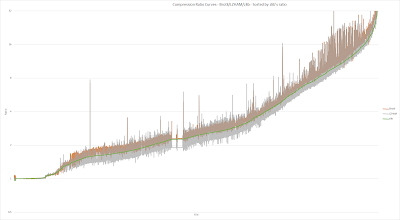 
It's clear from looking at these plots that simply stating "codec X has a higher ratio than codec Y" is at best a gross approximation. It highly depends on the file's content, the file's size, and even how well a file's content resembles what the codec designer's tuned the codec to handle best.

For example, Brotli has special optimizations (such as a precomputed static dictionary) for textual data. Also, like zlib, it uses entropy coding tables (the Huffman symbol code lengths) precomputed by the compressor, which can give it the edge on smaller files vs. codecs that use purely adaptive table updating approaches like LZHAM. (Also, I would imagine that the more stationary the data source, the more precomputed Huffman tables make sense.)

It's also possible to design a codec to be very strong at handling binary files. Apparently, BitKnit is tuned more in this direction. It still handles text files well, but it makes some intelligent design tradeoffs that favor really high and symmetrical compression/decompression performance with only a small sacrifice to text file ratios. This tradeoff makes a lot of sense, particularly in the game development context where a lot of data files are in various special binary formats.

Interestingly, Brotli and BitKnit seem to flip flop back and forth as to who is best ratio-wise. There are noticeable clusters of files where Brotli is slightly better, then clusters with BitKnit. I'll be analyzing these clusters soon to attempt to see what's going on. I believe this helps show that this data file corpus has a decent amount of interesting variety.

I need to break down these ratio graphs into clusters somehow. So we can then show results for "small text files" vs. "large binary files" etc. As the compressed totals show yesterday, Brotli and BitKnit have approximately equal compression power across the entire corpus. But there are categories of data were one codec is better than the other.

Looking into the future, it may be a good idea for the next major compressor to support both precomputed (Brotli-style) and semi-adaptive (LZHAM and presumably BitKnit-style) entropy table updating approaches.

Thanks to Blue Shift's CEO, John Brooks, for suggesting to chart this way.


I’m now starting to deeply analyze the performance of two new general purpose data compression codecs. One is Google’s Brotli codec, another is a brand new codec from Rad Game Tools named “BitKnit”. Both codecs are attempting to displace zlib, which is used by the Linux kernel, and is one of the most used compression libraries in the world. So I’m paying very close attention to what’s going on here.

To put things into perspective, in the lossless compression world we’re lucky to see a significant advancement every 5-10 years. Now, we have two independently implemented codecs that are giving zlib serious competition on multiple axes: throughput, ratio, and even code size.


I’m now using what I think is a very interesting and insightful approach to deeply analyze the practical performance characteristics of lossless codecs. As I learned while working on the Steam Linux/SteamOS project, robust benchmarking can be extremely difficult in practice. So I'm still gathering and analyzing the data, and tweaking how it’s graphed. What I’ve seen so far looks very interesting for multiple reasons.

One rough way of judging the complexity of a compressor vs. others is to compare the number of lines of code in each implementation. BitKnit at 2,700 lines of code (including comments) is smaller than both LZ4 (3,306 - no comments), zlib's (23,845 - no comments, incl. 3k lines of asm), or LZHAM’s (11,651 - no comments). Brotli's is rather large at 47,919 lines (no comments), but some fraction of this consists of embedded static tables.

Interestingly to me, BitKnit’s decompressor uses around half the temporary work RAM of LZHAM's (16k vs. 34k).

While writing and analyzing LZHAM I started with a tiny set (like 5-10) of files for early testing. I spent a huge amount of time optimizing the compressor to excel on large text XML files such as enwik8/9, which are popular in the lossless data compression world. I consider this a serious mistake, so I've been rethinking how to best benchmark these systems.

The new codec analysis approach I’m using runs each decompressor on thousands of test corpus files, then I plot the resulting (throughput, ratio) data pairs in Excel using scatter graphs. The data points are colored by codec, and the points are transparent so regions with higher density (or with data points from multiple overlapping codecs) are more easily visualized. This is far better than what the Squash Compression Benchmark does IMO, because at a single glance you can see the results on thousands of (hopefully interesting) files, instead of the results on only a single file at a time from a tiny set of corpus files.

I generated these scatter graphs on 12k data files from the final LZHAM vs. LZMA corpus. There is some value in using these data files, because I used this same test corpus to analyze LZHAM to ensure it was competitive against LZMA. This corpus consists of a mix of game data, traditional textual data, every other compression corpus I could get my hands on, some artificial XML/JSON/UBJ test data, and lots of other interesting stuff I’ve encountered on the various projects I’ve worked on over the years. (Unfortunately, I cannot publicly distribute the bulk of these data files until someone comes up with an approach that allows me to share the corpus in a one way encrypted manner that doesn’t significantly impact throughput or ratio. I have no idea how this could really be done, or even if it's possible.)


The X axis is decompression throughput (right=faster), and the Y axis is compression ratio (higher=better ratio or more compression). The very bottom of the graph is the uncompressible line (ratio=1.0).

Totals for 11,999 files (including uncompressible files): 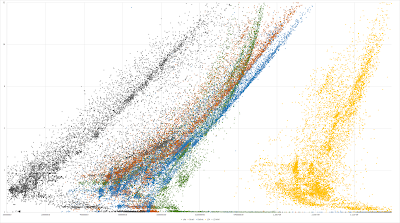 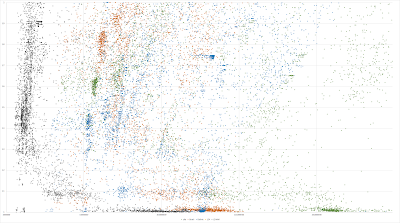 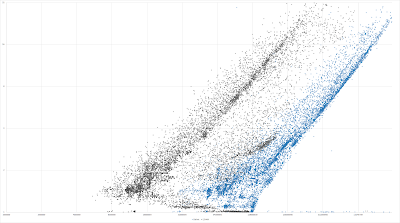 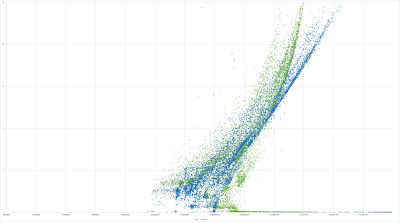 
Fabian Giesen (Rad) and I have noticed several interesting things about these scatter plots:

- The data points with a ratio of 1 (or extremely close to 1) show how well the algorithm handles uncompressible data, which is hopefully near memcpy() performance.

(Note LZMA’s data will be very interesting, because it doesn’t have good handling for uncompressible data.)

- Slightly "above" this ratio (very close to ratio 1, but not quite), literal handling dominates the decompressor's workload. There are distinct clusters on and near the ratio=1 line for each compressor.

LZHAM actually does kinda well here vs. the others, but it falls apart rapidly as the ratio increases.

- Notice the rough pushed down "<" shape of each algorithm's plot. LZHAM's is pretty noticeable. At the bottom right (ratios at/close to 1.0), literals dominate the decompression time.

Interpreting this as if all algorithms are plain LZ with discrete literals and matches:
As you go "up" to higher ratios, the decompressor has to process more and more matches, which (at least in LZHAM) are more expensive to handle vs. literals. After the “bend”, as you go up and to the right the matches grow increasingly numerous and longer (on average).

- LZHAM has an odd little cluster of data points to the right (on the ratio ~3 line) where it almost keeps up with BitKnit. Wonder what that is exactly? (Perhaps lots of easily decoded rep matches?)

- Notice zlib’s throughput stops increasing and plateaus as the ratio increases - why is that? Somebody needs to dive into zlib’s decompressor and see why it’s not scaling here.

I need to add my implementation of zlib’s core API (miniz) to see how well it compares.

- All algorithms were directly linked into the executable, and the decompressors were invoked in the same way

- Each decompressor is invoked repeatedly in a loop until 10ms has elapsed, this is done 4 times and shortest average runtime is taken

- Brotli was limited to comp level 9, as level 10 can be too slow for rapid experimentation, 16MB dictionary size (the largest it supports)

- LZHAM was limited to using its regular parser (not it's best of X arrivals parser, i.e. the "extreme parsing" flag was disabled), 64MB dictionary size.

- zlib's asm modules were not used in this run. It'll be interesting to see what difference the asm optimizations make.

The next major update will also show LZMA, Zstd, and miniz. I'm also going to throw some classes from crunch in here to clusterize the samples, so we can get a better idea of how well each algorithm performs on different classes of data.

I feel strongly that scatter graphs like these can be used to help intelligently guide the design and implementation of new practical compressors.

A big thanks to Fabian “ryg” Giesen at Rad Game Tools for giving me access to "BitKnit" for analysis. BitKnit is going to be released in the next major version of Oodle, Rad’s network and general purpose data compression product.

Scatter graphs can be beautiful

This is amazing. zlib - please step aside! 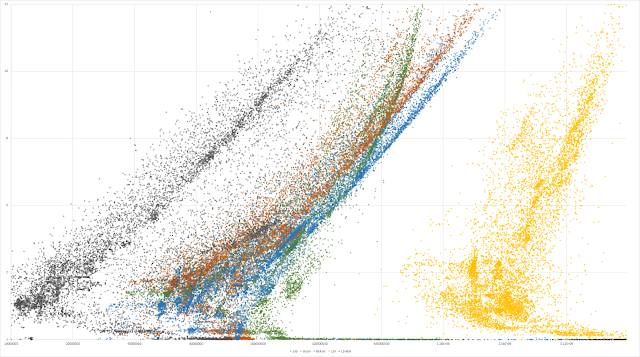 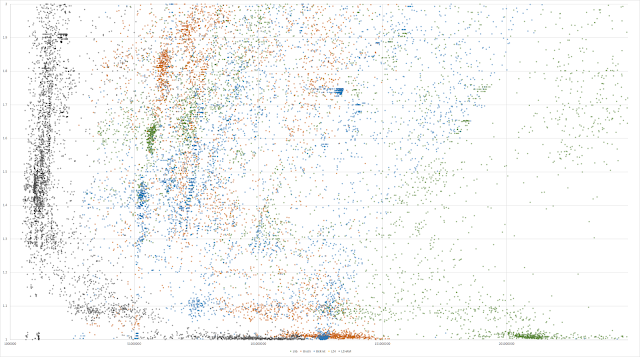 Posted by Rich Geldreich at 11:55 PM No comments: