We've been using Mercurial+TortoiseHg for the previous year (with hosting on Bitbucket), but the open source mainstream uses git so we're now switching vogl over to it exclusively. I gather most Linux devs primarily use command line tools, which is fine and all (I obviously do too when needed) but I want to find good GUI's for this stuff. The last time I had to use CLI tools for version control was 1997 under DOS.

There's an added bonus to being obstinate and pushing to find and use good native Linux GUI's for our major devtools: devs porting from the Windows/OSX/console worlds already have huge piles of solid GUI-based tools, and we need to find reasonably competitive native Linux alternatives. (When I say "native", I mean "not under Wine". I use Wine every day to run some old non-critical Windows programs I just can't find Linux alternatives for that I like, such as the Boxer Text Editor and Paint Shop Pro. Wine seems to run older Win32 apps better than Windows 7/8 itself these days!)

So I'm on the lookout for a git UI that is at least as good as TortoiseHg for doing the basics. I found a good Visual Studio alternative (QtCreator) a year ago after a wide search involving around a half dozen other Linux IDE's. I knew QtCreator was a good product after using its debugger for 20 minutes. It's by no means perfect but I've not had to use gdb/cgdb once since switching to it.

SmartGitHg has been on my radar, so I'm trying it out. It's commercial but has a 30 day trial (and is free for non-commercial use). This thing could be unusable -- I have no idea yet. 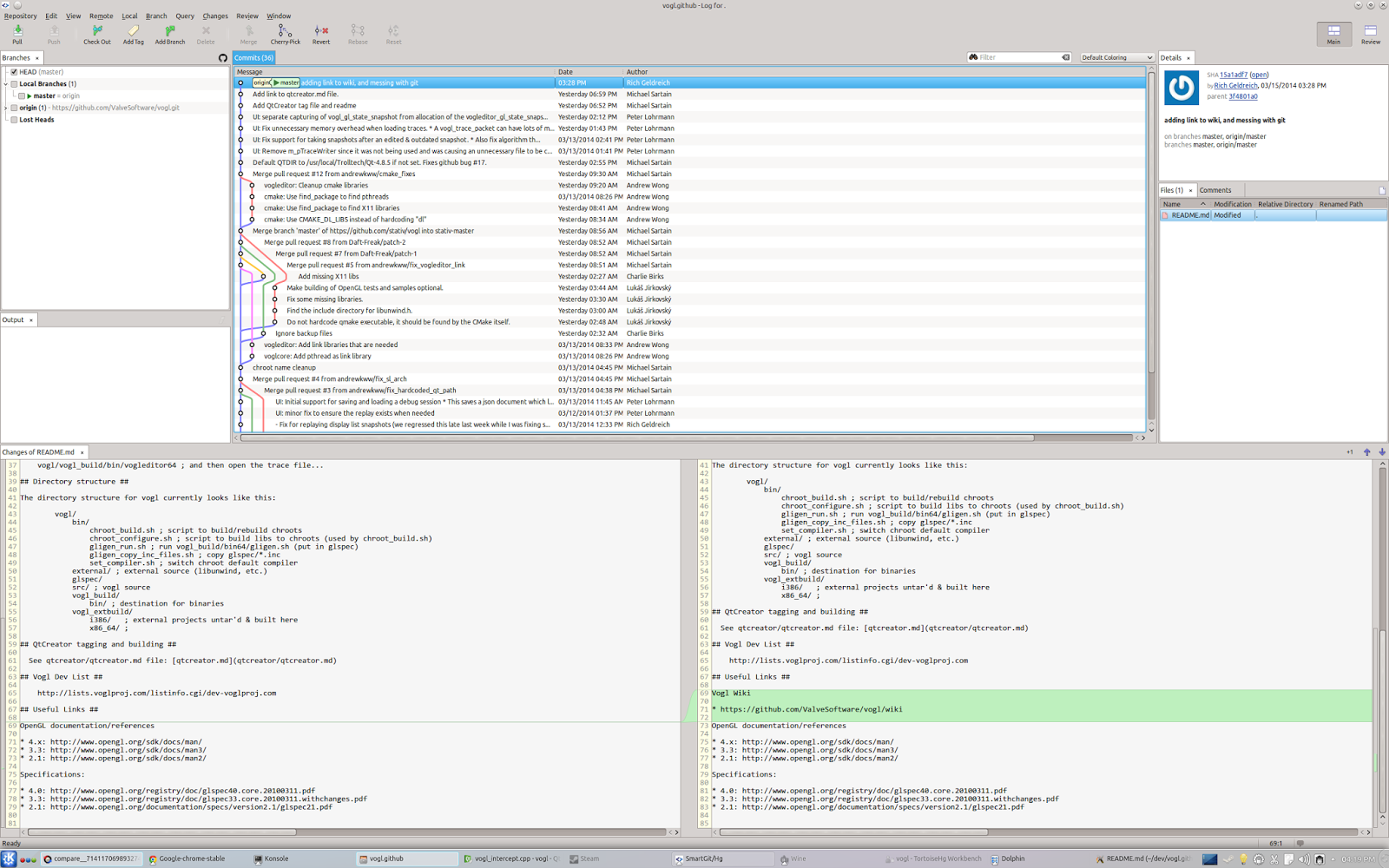 It needs openjdk-7-jre to run, which I installed first using the Muon package manager (under Ubuntu 13.10+KDE). The UI seems more complex, but cleaner, than TortoiseHg's. If you're already familiar with Mercurial/thg it seems pretty easy to map over the concepts and accomplish the basics. I just pushed a trivial change up using it (added a link to the vogl wiki). I'll keep trying UI's if necessary until something works for 90% of the things devs do (add files, check in, push, pull, merge, resolve conflicts, browse history, etc).

Posted by Rich Geldreich at 4:15 PM