Finished Up Support for the Hitachi 6309 CPU

I've added Hitachi 6309 support to my disassembler, monitor interrupt handlers, and monitor client. So I'm now able to switch over my 6809 test app to use the 6309's "native" mode, which is something like 15-30% faster. I can single step over 6309 code sequences and display/modify the extra registers (E/F/V). I verified my disassembler by using the a09 6809/6309 cross assembler to assemble a bunch of test 6309 code, disassemble it, then diff the results vs. the original code. Lomont's 6309 Reference and The 6309 Book are the best references I've found.

The 6309 is amazingly powerful for its time. You've got some 32-bit ops, fast CPU memory transfers, hardware division/multiplication, various register to register ops, and two more 16-bit regs to play with over the 6809 (W and V, although V is limited to exchanges/transfers). W is hybrid register, useful as a pointer or general purpose register. I've written a good deal of real mode (16-bit segmented) 8086/80286 assembly back in the day, and I really like the feel of 6309 assembly. 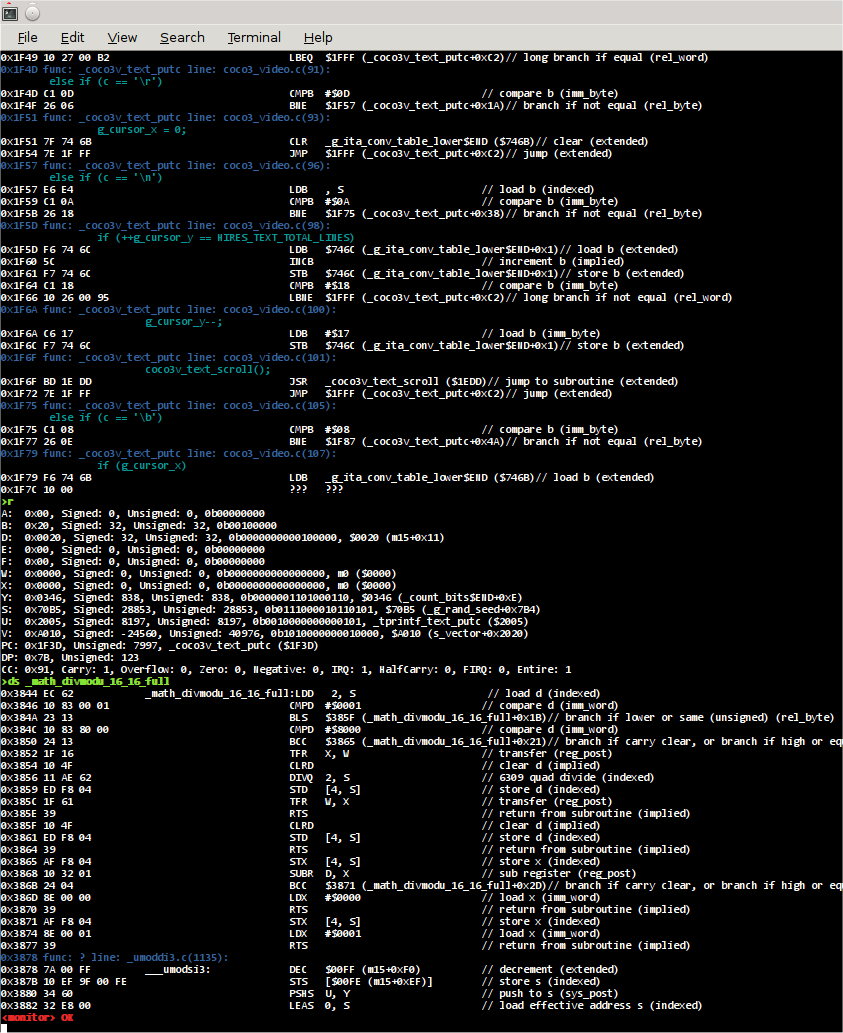 Unfortunately, the assembler used by gcc6809 (as6809) doesn't support the 6309. The gcc6809 package comes with a 6309 assembler (as6309), but it doesn't compile out of the box. I got it to compile but it's very clear that whoever worked on it never finished it. I made a quick stab at fixing up as6309 but to be honest the C code in there is like assembly code (with unfathomable 2-3 letter variable names and obfuscated program flow), and I don't have time to get into it for a hobby project.

This gets converted to an .s file which the gcc6809 tool chain likes:

This is a cheesy hack but works fine (for a hobby project).

Posted by Rich Geldreich at 1:17 PM