This chart was generated by the Squash Benchmark (options selected: Core i5-2400, 20.61MB of tarred Samba source code). Using exclusively text data is sub-optimal for a comparison like this, but this was one of the larger files in the Squash corpus. The ugly circles are my loose categorizations (or clusterizations): 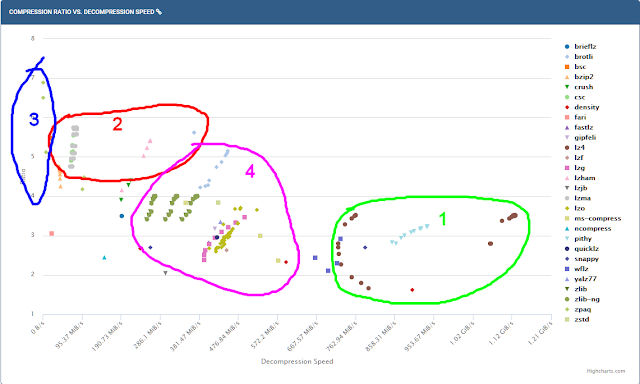 Possible use is for data that must be transmitted to a remote destination with lots of compute but an extremely limited network or radio link (deep space?)

Note: I made 3's circle on the ratio axis very wide because in practice I've seen PAQ's ratio tank on many binary files.

- brotli appears to have pushed the decompression frontier forward and endangered (obsoleted?) several codecs. It's even endangering several region 4 codecs (but its compressor isn't as fast as the other region 4 codecs)

Right now Brotli's compressor is still getting tuned, and will undoubtedly improve. It's currently weak on large binary files, and its max dictionary size is not big enough (so it's not as strong for large files/archives, and it'll never fare very well on huge file benchmarks until this is fixed). So its true position on the frontier is fuzzy, i.e. somewhat dependent on your source data.

- zstd is smack dab in the middle of region 4. If it moves right just a bit more (faster decompression) it's going to obsolete a bunch of codecs in its category.

If zstd's decompressor is speeded up and it gets a stronger parser it could be a formidable competitor.

Currently brotli is putting zstd in danger until zstd's decompressor is further optimized.

- LZHAM must move to the right of this graph or it's in trouble. Switching the literals, delta literals, and the match/len symbols over to using Zstd's blocked coding scheme seems like the right path forward.

- Perhaps the "Holy Grail" in practical lossless compression is a region 1 codec with  region 2-like ratio. (Is this even possible?) Maybe a highly asymmetrical codec with a hyper-fast SIMD entropy decoder could do it.

Posted by Rich Geldreich at 9:29 PM