My current guesses on where this field could go. This is biased towards asymmetric codecs (offline compression for data distribution, not real-time compression/decompression). 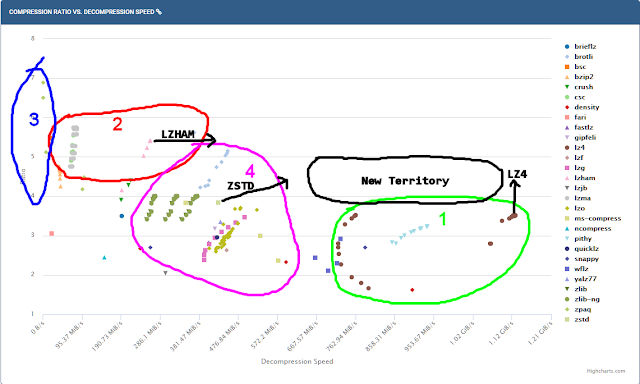 LZ4: Higher ratio using near-optimal parsing but same basic decompressor/instruction set (note I doubt the LZ4 arrow can move up as much as I've illustrated).

BROTLI: Brotli's place on the decompression frontier is currently too fuzzy on the ratio axis, so an easy prediction is the compressor will get tightened up. Its current entropy coding design may have trouble expanding to the right much further. (The same situation as LZHAM. The fast entropy coding space is moving rapidly right now.)

New Territory: Theoretical future "holy grail" codec which will obsolete most other codecs. Once this codec is on the scene most others will be as relevant as compress. If you are working in the compression space commercially this is where you should be heading.

Note the circle is rough. I tried to roughly match Brotli's ratio in region 4, but it could go higher to be closer to LZMA/LZHAM.

Until very recently I thought codecs in this region were impossible. (Now, just incredibly challenging!)

Another interesting place to target is to the direct right of region 3 (or directly above region 2). Target this spot too and you've redefined the entire frontier.

- Squash benchmark - Easily explore the various frontiers with a variety of test data and CPU's.

Posted by Rich Geldreich at 4:13 PM