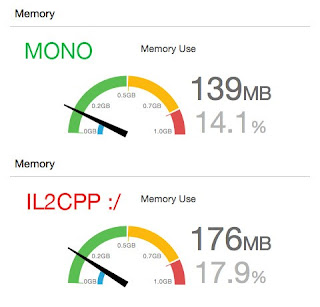 IL2CPP uses around 30-39MB more RAM for our 32-bit build. We've been struggling with memory on iOS for a while (as documented here). I honestly don't know where to find 30MB more RAM right now, which means our title on 512MB devices (like the iPhone 4s and iPad Mini) is now broken. Crap.

Apple is requiring app updates to support 64-bit executables by June 1st. We've known and have been preparing to ship a 64-bit build of our first product for several months. The only way to create a 64-bit iOS build is to use Unity's new IL2CPP technology, which compiles C# code to C++:

The Future of Scripting in Unity
An Introduction to IL2CPP Internals
Unity 4.6.2 iOS 64-bit Support

The additional memory utilized by IL2CPP builds vs. the previous Mono-AOT approach is ~10MB for our code with an empty scene, and >30MB with everything running.

We've also tested the latest patch, Unity 4.6.5p4 (which is supposed to use less memory on iOS) with the same results.
Posted by Rich Geldreich at 2:53 PM